Safety in America as a thing.  I’m trying to decide if it is a great thing.
Living for several years in an environment where one is searched on every entrance to the mall or large event, or with heavily armed guards outside the workplace or roaming the streets, One gets tuned into the potential of threats that could arise. It is an awakening to come home to America with so few safeguards.
There are far fewer cameras covertly or overtly placed. A much smaller security footprint is remarkable. It is breath of fresh air really to feel so un-oppressed by safety measures.
Until one’s breath is taken away looking around at all the potential gaps that could allow something bad to happen.
The whole safety net seems to have a lot of holes. For example, thanks to Nice, France, roads are no longer barricaded with wooden barriers. Now city buses or dump trucks are parked to block major roads. Don’t want any deranged person to commandeer a truck and go for a death ride through the crowd.
At the same time, large public events are often totally unscreened. 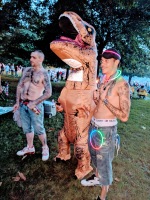 Spawn of S.A.M. has taken to dressing up in a dinosaur outfit. This is not a time to ask why. It is just something they like to do.  I suggested that the local fireworks display may make for some interesting fun.

And so onward we went. Dressing up in the car. We waddled on into the venue and were largely unchallenged. We even asked a guarding cop if we could pass.
“Sure!  Just stay cool in that thing!”
And off we went spreading Jurassic joy.
This is my paranoia peeping through, but really, what better to disguise a suicide vest than inside an 7 foot inflatable dinosaur?  Have we learned nothing from the Trojans?
Mind you inflatable dinos aren’t the only way. Coolers, wagons, bikes, picnic baskets are all potential vectors. It’s a deadly nightmare. And folks may say that controlling things couldn’t be done here, but many places do it with leagues of portable fencing and thousands of guards searching each individual box or bag coming in. 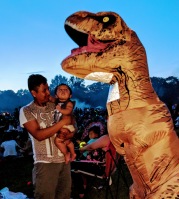 But it’s pleasing to find an America that is largely safe and in between firework explosions and when one stops thinking about it, it is relaxing and fun. And America in the Heartland is, these days, white and brown and yellow.
We were heartened to see Syrians, Somalis, Hispanics flocking to celebrate America’s birthday along with everyone else. Somali children like inflatable dinosaurs just as much as American children, and just as much as they crave a safe place to grow up.
And under the rockets red glare, everyone’s “oooos” and “aaaahs” sound exactly the same.