Swedish Meatballs in the Promised Land

This likely won’t be the first time you hear this from me. I know I won’t solve anything. I know I won’t say much that hasn’t already been said many times over thousands of years.
I won’t even understand the depth of the problem in the Middle East. I’ll just dip my toe into the ignoramus wading pool.

This weekend we went to visit Mt. Nebo which in Arabic translates loosely to the place of the prophets.

After leaving Egypt, Moses and his flock are wandering around the desert.  He’s got his main orator and older brother, Aaron with him.

When they get close to present day Petra, God comes to Moses in a dream and tells him that it’s time for Aaron to die. Aaron is 120 years old already.  It’s time.  Moses, himself, is 118 or 119.  God says, the two of them have to get to the top of this particular mountain before it can happen.

So, Moses, does as he’s told. He and Aaron and a nephew climb to the top of this mountain.  They take in the view, find a nice cave.  Aaron lies down for a nap and kicks it. You, dear reader, can go there now to Jabel Arun, where there is  monument.  We hope to go there one day.

Moses comes back down and they start wandering again. They make their way north for about for a year and 350 kms. They come to the Madaba area and they take a rest.  It’s arid and people are starting to get thirsty.  Moses asks God for some help and God tells him to strike the ground with his stick.  He does, and water spews forth.

There is still a spring there.  Under a big, old eucalyptus tree. We’d need a car to get down there, so we’ll save that for next time.

The flock spends some time there and God comes around again and tells Moses to Climb to the top of Mt. Nebo.  Moses is now 120 years old and he know which way the wind is blowing, but he trudges to the top of the mountain 817 meters high. 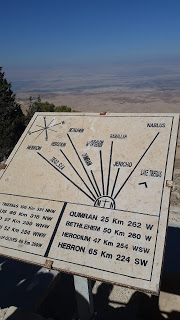 Once he got to the top, God tells him to look out to the East and promises his people all the land that he can see. But, sadly Moses won’t be able to go there.  He has to stay behind.  It’s time.  And, so, shortly thereafter he died and was buried somewhere there on that mountain. Moses’ assistant, Joshua takes up the reins and leads his people into the promised land.

Prophets have been traipsing around here without maps or GPS for centuries after. Elijah, Jeramiah, John, the Baptist, Jesus.  Often their stories have them scaling some high place and looking down on Jerusalem, known as the gate to heaven.

600 years after Moses, the Prophet Mohammed has his revelations and has started his branch of religion.  He’s on his own spiritual journey and winds his way up from Arabia. He, too, finds a spring and he, too, climbs a mountain and looks down into Jerusalem and wants to go there.
It’s on the Temple Mount that Mohammed goes to visit heaven for a few days. He has some high level consultations with John, the Baptist, Moses, Elijah, Jesus and Yahweh itself. Apparently, it was Moses who urged Mohammed to go back to God and renegotiate the number of times people need to pray per day down from 50 to a, more manageable, 5 times a day.

Mohammed comes back down to earth at the Temple in Jerusalem and decides this would be a good place for a mosque. Thus, a conflict was born. I don’t have any knowledge about why this promised land was given to Mohammed, or if Moses had any input during their high level talks.

Back in the 21st century we took our tour bus to the top of Mt. Nebo. There’s a basilica there that they

uncovered in 1933 and have been restoring for a while. It reopens later this month. There are some wonderfully preserved stone mosaic flooring that are promised.

We walked around and toured the small museum and at the highest point we looked down into the promised land.  Amman, Jericho and Jerusalem before us.

I wondered about the promise of of such an arid looking land. It’s rocky. It’s water poor. And, there’s a giant life sapping salt sea. But, after 40 years of trudgery, I’d probably cherish it if someone told me it was mine. But, really, it doesn’t look like it’s worth fighting so hard over. I mean crusades and terrorism. Battles fought near and far, over the aged beliefs of all these enlightened and special people.

The following day, in the search of some household goods, we headed to IKEA very near the Madaba area.  It’s set up like every other IKEA, snaking you around the myriad of ways you can decorate your space cleanly and inexpensively.

We stopped mid-way for some lunch at the cafeteria. It was a bustling time to eat. There were a couple of other Americans there. We heard some Spanish speakers. Mainly, thought, there were Jordanians. Some in shorts, some in ripped blue jeans,  Many of the women in burkas or very conservatively covered.

It struck me there in the cafeteria line. If you strip away all the dogma and the dress codes, I wonder if we’d all be happier with functional, inexpensive furniture, lighting solutions and some Swedish meatballs with lignonberry jam.

A travel blog who shares impactful travel guides, stories and inspiration for all adventurous travellers.