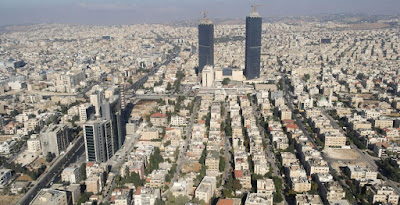 Our new digs are in a fairly upscale part of town.  Lumped in with hundreds of other 4 story sand colored buildings.  It turns out that the King decreed that housing be of three varieties.  Faced on all sides with limestone, faced on one side with limestone and painted beige or painted all beige.

It’s capacious, if rather oddly laid out. There’s definitely a public space and a private space inside

It is not as large as our last place. We’re upstairs and we don’t have a yard. The dog, who’s not really lived in a multi level, is getting used to the steps.

As yet, it doesn’t seem like we’ll have need for the staff that we had before.  Maybe a parttime housekeeper, but no need for a driver or a gardner.

There is a boab.  This is a guy who lives in the basement who keeps up the place.  Removes trash and washes your car.  He watches fuel levels and tells you when to order more.  It’s a different concept, but apparently you can ask him to run errands for you. So, far we’ve established that we will give him money, but beyond that, it is vague. He’s very friendly, but there is an adversarial quality to the relationship.  A man who lives in your basement with access to all vital fluids tacitly demanding cash every month. But, it’s less than we paid before and part of the culture.

As in our last life, we are near several mosques.  It’s nice to hear the call to prayer again. Except for the 5 am one.  That still takes some getting used to.

The singers here are better. Maybe the arabic is less accented than those in Indonesia.  Maybe it’s better genetics.  Maybe the dusk adds a certain husky quality. Maybe they bought a better speaker system.  Whatever the reason, it’s more rich and sonorous.  At 5AM, you can get back to sleep pretty easily.

I’ve been reading lately about coherent breathing and meditation and how the ideal breathing rate when one is totally relaxed is 5 to 6 times per minute. I wonder, on some level, if this call to prayer is in some way supposed to mirror this. A reminder to pause and breathe out.

Click Above.  Take a moment and listen and imagine just stopping for 90 seconds 4 or 5 times a day