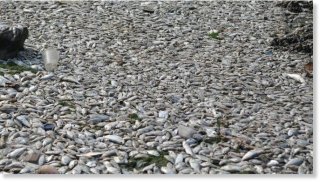 I was exchanging money the other day at the Embassy.  I waited in line behind one person who was chatting to the cashier.  When it was my turn the cashier started chatting to me as well.

“Doc, that guy who was just here he got so sick from eating the fish.  You know the fish?  He ate them!”

A side note here… the number of people here who talk openly of their diarrhea is astounding.  I can number on 1 or 2 handfuls a day, the number of acquaintances and total strangers who reveal their bowel issues.  Co-workers over lunch.  Money changers.  Cab drivers.  Waitstaff.  WAITSTAFF!?

And it’s not just the Indonesians. We all do it.

But anyway, a week and a half ago there was a fish kill. Millions of fish washed up onto the shores of North Jakarta. This happens around the world from time to time.  I’m not sure that they found the exact reason for this fish kill, but there was an announcement by the government in the media that the fish was not harmful to eat.

“My husband and my son were both sick. All the guys on the 12th floor are sick.  I think all because they ate the fish.  Why does the government say things like that?”

I told her they seldom can tell what causes things like this to happen. Often it’s because of fertilizer run off causing plankton or algae to bloom and suck all the oxygen out of the water.  Sometimes it is some other toxic waste. Sometimes it’s sewage washing out to sea.

“However the fish died”, I said, “it’s never a good idea to eat something that washed up dead on the shore.”

“Yeah.  I’ve sworn off fish for a few weeks.  Maybe you should to.”