What’s up with the Donald? 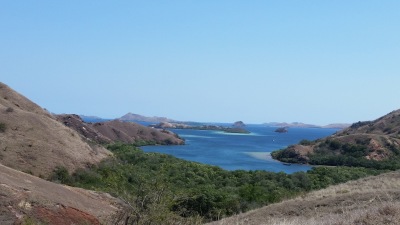 We had a trek on our last day on the island of Komodo itself.  We were hiking up to a ridge that overlooked the water and the islands and islets beyond. This is it in this photo here.

We’d heard a lot about the dragons and the other wildlife on the island and had been walking in silence for a bit, when our ranger turned to us and said, “What’s going on with Donald Trump?”

This is not the first time I’ve faced this question.

I’ve told you Indonesia loves Barack Obama. In their minds he is a great leader leading a great country.  Despite the evident anti-muslim sentiment shown in the media and the Kardashians, the United States is still a place to be aspired to.  Many people want to visit someday.

There is such a disparity here between the haves and everyone else.  Those with money have  lot of money. I mean private jet and lamborghini-for-your-birthday money.  The millions without live on a few dollars a day.

The general perception here is, if you’ve got a lot of money, you got it from a river of corruption and payoffs and perhaps with the help of the police who helped snuff out your competition.

I think it creates a great dissonance for Indonesians when a man with what they presume is corrupt money comes to the fore as a leader of a country and people they admire so.  How can this be?

So, right there on that ridge, in the middle of nowhere and 10,000 miles from the U.S election I found myself trying to steer the conversation elsewhere. No, Obama can’t run again… It’s early…  There is a lot of time…  I say that I don’t want to say anything because Mr. Trump may be my boss someday.