I spent 3 days last week on my first work trip to Surabaya on Eastern Java.  It is a sleepy little port town of 3 million people.
On arrival, I was pleased to find that the sky was still blue and the sun still hurt when I looked directly at it.  Traffic flows at a reasonable pace even with the buzzing about of motor scooters.  At speeds even, that made me reach for my seat belt.
Though a smaller town, I found out that the US has actually had a consulate there since the late 1800’s.  There  has been a lot of trade coming out of there and the port, at one point, was more important than Jakarta dating back several hundred years.
The people are fiercely proud of their resistance to the Dutch when they gained their independence after WWII, largely with sharpened bamboo spears.  This is a recurrent symbol around town with several statues erected.
One, a series of large bamboo spears bundled together was listed as an area tourist attraction.  I saw it on a list of must-sees.  Pickings for the list must be slim for there is little to recommend this place .  It is concrete and 40 feet tall and sits in the middle of a noisy traffic circle, so it is nearly impossible to get to, but there you are.  It photographs much better than it appears in person.
There are apparently several hikes and volcanos in the area, but for tourist attractions in the city itself, there is a lack. 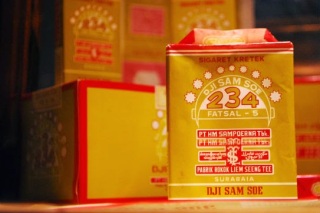 One interesting spot that was open after work was the House of Sampoerna museum.  This documents the rise of Mr. Lee, a Chinese immigrant from orphan to food cart owner to tobacco magnate.  In a rags to riches story, he earned enough to go back and buy the orphanage’s colonial building he was raised in and turn it into a cigarette factory.
About 300 local women still hand roll, cut, count and pack the clove and tobacco cigarettes that the area is famous for.  The whole building is deeply scented of cloves. At the end of the exhibit you can actually overlook the factory floor and watch the whole process.
One bonus, the museum is free.  There is also a nice café with live music and an art gallery.  In the 90’s, the family sold the whole operation to Phillip Morris and are living off their wealth, I’m sure. 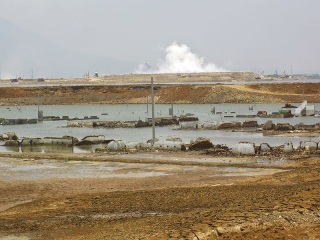 One place, I didn’t get to was the Sidoarjo Mud Volcano.  This, Ohio, is an absolute nightmare of fracking gone wrong.  In 2006, an oil/Gas exploration company went drilling and tapped into some geological structure and…. Whoops…. Up came the mud.
Like a land based deep water horizon, though not oil, just millions of cubic yards of toxic mud. It has consumed an entire village, some 40 hectares, under feet of the mud and it still flows to this day.  They can do nothing to plug it, so they’ve built a huge earthen dike to hold it all back and prevent it from flowing into a nearby river, and now the mud is about to overwhelm this effort.  There is talk of trying to route the whole mess into the ocean which can’t be good.
There is also fear that because all the mud is surfacing the space below the mud is empty and that the whole thing will sink and mother earth will clean up the mess in her own way.
Who’s responsible? No one has paid for it.  The owner tried at least to sell the land for a two dollars to remove himself from the situation.  But this was blocked.  There have been some legal charge, but nothing has been pursued.  The company has never paid anything blaming the mess on an earthquake 300 miles away and occurring some weeks before.  Seems like things are at a stalemate.
Thanks mostly to my wife, who’s traveled for work and stayed almost exclusively in Marriott hotels the last two years. I got an upgrade to one of them fancy rooms with a phone in the bathroom.  It was way up on the 20th floor with a nice view of the city.  I could count 6 mosques within my view and do you know what I learned?
I learned that the first call to prayer is around 4:30 in morning and that 20 floors is not high enough to escape hymns to god.
One other thing I learned is that in the name of service, if you put in a wake-up call for 530 and wake up earlier, get in the shower and don’t answer  your wake-up call they will come to your room and enter it at nearly the most inopportune time.  Maybe they thought I was frail and feeble when I checked in, but….  It could have been embarrassing.
If you want more perspective on this whole adventure. check out
http://adventuresinwonderland4.blogspot.com