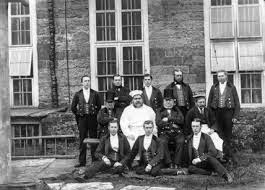 Both our driver and our pembantu started work this week. I don’t think I mentioned the driver.  More on him in a minute.

The folks with State recommend and offer background checks on your house staff.  They have a whole list of things they want.  From all this, you can learn a lot. One thing you learn is never store your documents if there is any chance of things flooding. Bu A. lost most of her important documents in flooding over the years.  “All my papers turned to soup.”  Mostly she was talking about her birth certificate.  She told me she only went to school through the 7th grade and so her seventh grade report card was all she had, and it turned to soup, too.

“But, Bu A., how did you learn to speak English so well?”

“Ah. I was nanny and I read to kids and they correct me when I got words wrong.”  She still likes reading.  From what I gathered she likes “tween” fiction.  She does math well, too.  She told me she is the fifth of six children and that her dad was in the military. Her dad wanted a son to also send to the military.  After the sixth girl was born they stopped trying.  All six girls were sent to work in 8th grade, which is tragic if they are all as intelligent as their sister. The military is often seen as a way to great wealth, but this seems rather short sighted.

She doesn’t fault her father though. She said he was a really good father.  She got married at 19 and had kids. When she left school she thought she’d not need any more school.  Now in her mid-30s, though, she thinks about going back maybe to an adult program to graduate.

She has been very helpful with getting things done around the house and has proven herself a really good cook, at least when it comes to Indonesian dishes.

It has been pleasant that she gets along with our dog.  This talent is hard to find.  It is engrained here that dogs are disgustingly dirty creatures, so dogs are not tolerated very well.  Often landlords refuse to allow them and househelp refuses to work around them.  Cats, though, are tolerated and seem to run around the city like squirrels, both inside and out.

Anyway, I had told Bu A, not to worry much about the dog, that we would take care of her. But she has fed and watered her everyday and said the other day, “I wanted to take her out for a walk, but I couldn’t find her…um…kite.” She made the sign for a leash.  Of course, I’ve adopted this lingo.

Pak H, our driver, also has a seventh grade education and, aside from also storing his important documents in flood prone areas, is also a remarkably intelligent and resourceful gentleman.

He’s also very respectful and deferential. Everyone here is, really. I met him at my place so we could go get my car.  We waited and waited outside my house for a taxi because it was rush hour.  “Mr. S.A.M, do you do like this every morning?  Wait like this?”

“Well, not in the morning, but other times, yes. Usually a taxi comes quickly.”

He asked this same question twice.  Then after some time I asked “Pak, do you think….”

He cut in without missing a beat, “…we should go to the hotel down the street and catch a cab there? Yes, Mr. SAM, good idea.”  And he sprinted off ahead of me.  He didn’t want to tell me I was stupid for waiting like this when there was perfectly good taxi stand around the block.  Z has adopted this manner of telling me I’m stupid as well.  It is cute….. for now.

We found our car in the center of the city. I actually bought it about two months ago, but hadn’t seen it.  The A/C had gone and there were 1.5 flat tires not including the half inflated spare.  Pak H and I changed the flat with near-NASCAR speed.  He is quite good at finding repair shops.  Within an two hours of returning he had all the tires fixed and the A/C recharged for a little over $20.  I was amazed.

By the afternoon the car was washed and fresh wax applied.

By the next day, the inside of the car was spotless.

When he was done with the car maintenance, I found him sitting in the corner of my garage on a plastic mat on the floor.  Shocked, I offered my basement which is attached to the garage, has a couch and A/C and we have not used it.  There is a fridge there and I told him he could keep some water or drinks there if he wanted.

“No, no,: he declined, “if I could get mop and mop out garage, I be fine.”
Sure enough, the following day, my garage is spotlessly mopped.  We even take off our shoes to go in there now.