Along the Bourbon Trail 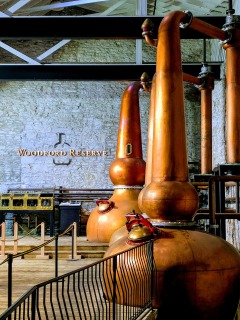 Here’s a thing that makes America great,… the Bourbon Trail.
Maybe I wasn’t paying attention, but since returning, I’ve heard about the ice cream trail and the donut trail winding their way through the Midwest. Those may be worthy of exploration one day, but this year’s mission was the bourbon trail.
As noted last week, there 13 official stops on the trail between Lexington and Louisville. You can pick up a passport at any of them and collect all your stamps. There are any number of Unofficial stops as well.
Over two different weekends, we hit Woodford Reserve, 4 Roses,  Bulleit, Angels Envy, EvanWilliams, Jim Beam and Maker’s Mark.
I was a total bourbon nube until this year. I knew it kind of hurt to drink it and I thought it all tasted pretty much the same. But after, taking a couple of tours, and some guided tastings I have a much better appreciation.
What’d I learn? That all bourbon is whiskey, but not all whiskey is bourbon. That people spell the word whiskey either with or without the letter ‘e’ in it depending on whether the country of origin has a letter ‘e’ in its name, for god only knows why. I learned that bourbon can only be produced in the US and that 95% of it is produced I. Kentucky.
Why Kentucky?  It’s in the water! The limestone rock is so ancient that all the iron has been leached out. The rock also filters the water and makes for sweeter bourbon and faster race horses. There’s no iron in the water, so the horses are lighter and can run faster.
That last bit is fake news. I have no idea why they run so fast.
So, what about the bourbon?  They were all good, but I liked makers mark the best. It was smoother because they don’t char the barrels as much. Angels’ Envy was also good.  They finish it off in port wine barrels for a unique taste. There were some well-aged single barrel whiskeys that were great.  Bookers was one, but quite pricey.
Here are your tourist tips. If you head to downtown Louisville, you can lock off quite a few stops.  A number of distilleries have smaller active stills and tasting rooms set up. Angels’ Envy, Evan Williams, 4 Roses, Rabbit Hole, Jim Beam all have operations there.  Purchases can, of course also be made. 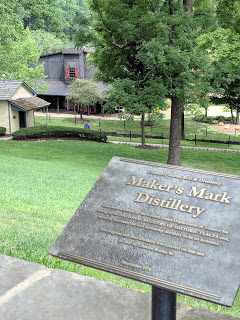 I would encourage a visit to the countryside for a visit to a couple stills. Woodford Reserve and Makers’ Mark are particularly scenic. The rolling hills make for great driving.The tours are also quite good.  Perhaps because they’re Kentuckian with names like Mawley or Jimmy James, or perhaps because they’re great storytellers, the guides are pretty awesome at conveying the story of bourbon in an entertaining fashion, even if you’re not drinking afterwards.
If you don’t have a lot of time or a designated driver, check in at a hotel and find a bar like the Taj Speakeasy. Pull up a stool and let your gaze wander up the wall before you. And begin. You may not get the full history of each but you’re sure to find something you like. Order a flight or ask the barkeep for some tips.
Also, make a stop at Art Eatables where they make bourbon infused and pairing chocolates. A delicious treat.
For an awesome meal, try the Mayan Cafe. A super innovative South American restaurant.  They even have a bourbon flight that pairs well with their house specialty, Lima beans.  You’ll never think of Lima beans the same way again.
Drink responsibly and enjoy!