Last entry was supposed to be a goodbye. My last entry from Jakarta. But then I went for a walk the other day and this all happened.

After work, I needed to get some pulsa, prepaid money on my phone. With a short time left, I figured I’d need about 4 dollars worth of data and calls.  There’s a man in the village across the road who makes his living recharging money on phones.  For $0.15 per transaction, he’ll put whatever amount you want on your phone. You have to give him the money, of course. His shop is about 10 minutes away.  I took the long way home so all in all it was a 30 minute walk.
This is all that I saw in my very short stroll.
I opened the tall gate at the end of my driveway and found the security guard bent over clutching a good size rooster in his hands.  Blue and green in plumage with a bright red crown.  The rooster, not the guard.  The skinny patriarch of a family that lives in a narrow lean-to crack between two houses down the block was stringing twine around the birds legs.  The rooster waited surprisingly patiently.
“Ah…  Dinner?” I asked.
“Yep.”  said the guard with a smile.
Halfway down the block a trio of 20 or 30-somethings was briskly walking toward me, head in their phones.  I saw that they were chasing Pokemon, which has taken Indonesia by storm as well.  This is unusual in that Indonesians don’t tend to move briskly anywhere. It’s too hot to move fast, so they saunter or sit.  This is a population that culturally uses the elevator to go down one floor.  It was good to see these guys getting some activity.
Down an alley by the pulsa shop, walks a 6-foot transvestite in a bauble-laden turban and a full length red velvet dress.  She has a small,  battery-powered speaker slung around her neck.  In one hand is a mic, in the other a silk purse that’s open.  She’s strolling down the alley crooning for small change. She serenades a group sitting on the steps of the mosque.  Most of them donate.  Who says all Muslims are intolerant. It is show time!
And then there are these guys.  I see them at dawn. I see them at dusk. They march around hustling and singing a song while they do it. I often hear their echoes in the evening or on the way to work.  This time I caught a snippet on film. Click the link below 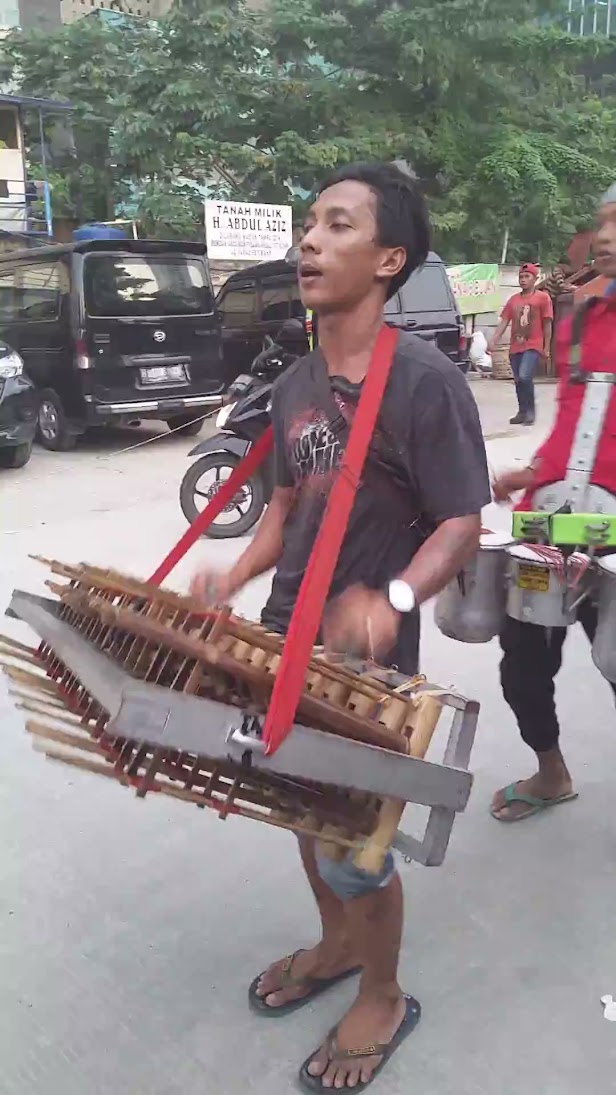 Street Musicians Near Senopati
Walking back to my gate I asked the guard.  “Where’s the chicken?”
He drew two fingers across his throat.
“Did you eat him?”
“Not yet!” Then he laughed.  “Okay, Mister!  Have a good evening.”
And that is a 30 minute snippet of Jakarta Life. There is no way you can catch it all!