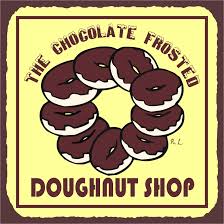 A few evenings ago, I went to a wine tasting hosted by a group called Internations.org which is an expat group with chapters around the world.  People sponsor events and often you can find something like a dinner or movie or a travelling group so that one doesn’t have to go alone to things.  There is a pretty active group here in Jakarta.  Lots of local folks join as a way of networking.  If there is a group near you, check it out.

But the wine tasting….

It was all for beginners. No one there knew much of anything about wine and we worked our way through generous pours of 3 whites and 6 reds and very little food.

The group of us were sitting finishing our wine.  Myself, 4 Spaniards, 2 Chinese, a Japanese and 4 Indonesians.

I was speaking to an Indonesian woman. She asked.  “Do you know the Donut Shop?”

The music that had just started playing.  She spoke softly as many here do. The wine made me a trifle more deaf and the woman a little more slurred.  “What?” I replied.

She leaned in and asked again.  “Have you heard of the Donut shop?”

“Donut shop and the Muslims?”

She continued. “I mean, I’m not worried.  I’m Protestant, but still I from Indonesia.  How will he know?”

Others joined in the conversation, firing question after question, mostly in an accusing fashion. “Do you support Donald Trump?  Do you actually know anyone else who believes as he does?  When is the election?”

They all almost yelled in unison. “November? We’ve got another year of this?”  And then, “none of your choices of candidates are very good.”

I’ve mentioned this a bit before, but it’s at this point in conversations like this that you can see such apprehension on the faces.  America is the world leader. America the beautiful.  Truth, justice and the American way!  Land of the free. Home of Brave. Land of opportunity.

How does that reconcile with one man’s isolationist speech and media images of thousands of placards and postings supporting him? Civilians carrying arms in the streets. In foreign eyes, what does it mean for them when such paralytic divisiveness reaches the promised land?  What hope is there in the world?

I try and defend us.  I do.  “No, of course, we don’t all think that way!”  “Americans have lots of different opinions and we’re free to express them all, for better or for worse.” and “Guns are super fun to shoot!”

Over time, though I wonder about the chronic presentation to the world of such views and images. How will we be approached for help or to help?  Will anyone turn to America to go in on a business deal?

Regarding the recent Donald Trump statements, Spawn of S.A.M. #2 was asked earnestly by her Japanese friend at school the other day.

“Did you use to believe that before you got out of the country?”  This was from a young person.  Already our image may be changing. We may be turning away the world just when we need each other the most.