One other thing that I did not know about Samoa is that it is the final resting place of Robert Louis Stevenson.  He of “Kidnapped”, “Treasure Island” and “Dr. Jekyll and Mr Hyde”   I completely forgot or, indeed, never knew, that he wrote “Dr. Jekyll”.  I guess I thought that it was sort of autobiographical.  But, anyway, Mr. Stevenson is here.

He came here in the late 1800s in search of a better climate for his TB which he’d had for a ver long time.  He was here for just 4 years, but he must have made quite an impression on the Samoans, for they gave him their own name which was easier for them to pronounce.  “Tusitala” means story teller which I think is pretty cool.

Here are some other things I learned.

His father was an architect who built the first lighthouse in Scotland.

He slept in a separate bedroom from his wife, but he cut a window in the wall between their two beds so he could talk to her through the wall. 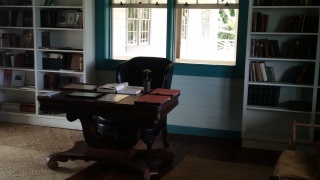 He had a really nice office and desk, but he did most of his writing in bed because he was sick a lot.

He is responsible for introducing the pineapple to Samoa, bringing it when he came from Hawaii.

His wife was responsible from bringing Samoa the cocoa bean which Samoa is know for.

And then there was this. We were got a guided tour of his house, set up like it was when he lived there.  We came down to the end of the tour and the guide was pointing out furnishings that were RLS originals.

Guide. “Original furnishings are the mirror, the chest of drawers and the painting of Christopher Columbus who was his very good friend.”

Me: “What?  Do you mean the artist was his friend?”

Guide:  “No,no.  Christopher Columbus.  He was the one who discovered America.”

Guide:  “In 1869……. Okay, so I am actually a student at the University of the South Pacific and I’m doing these tours to get work experience.”

Me:  Yeah.  Check on the story about the painting. I think you may be a bit off.

So, really, all that other stuff I learned, may be wrong too. The pineapples, the bed, the window in the bedroom wall. All of it may be just made up.  I did read that he really did live there and died in 1874.

He’s buried at the top of the mountain behind his house.  You can hike up there. Is quite a slog, but I figured, if Robert Louis Stevenson could do it with tuberculosis, I could do it, too. The view over the city is worth the hike.

Here’s what is inscribed on his tomb:

Under the wide and starry sky
Dig the grave and let me lie.
Glad did I live and gladly die,
And I laid me down with a will.
This be the verse you grave for me:
Here he lies where he longed to be;
Home is the sailor, home from the see,
And the hunter home from the hill.
Several days later, I was passing through the Sydney airport.  I needed some cufflinks  (Don’t ask), so I asked the lady at an Australian souvenir store. She said “We have these aboriginal designs.  These here are a representation of a story teller sitting around a meeting spot.
Seemed like a fortuitous tie-in so, I bought ’em.  A good end to the trip.