Ramadan started this week.  This is the Muslim holy month of fasting.  I’m told life is going to change.

The Islamic calendar is a lunar one and Ramadan starts with the new moon. One would think that because the new moon is printed on calendars and that people have been figuring the position of the moon for eons, that they would have figured out when Ramadan begins.  Persians and Arabs were some of the earliest mathematicians probably for just this reason.  But, in this is a holy time and not a scientific time, so the scientists and the math wonks take a back seat to the more spiritual. 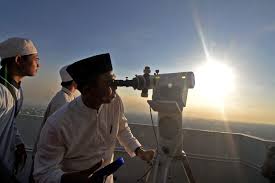 Because the new moons are printed on your calendar, everyone has a pretty good idea of the start of the holy month, but here in Indonesia the start is by government decree.  This decree came two days before the start. Apparently the government has a panel of 19 skywatchers from all around the country and they all look at the moon to see if it is totally invisible or not. Then they gather in a room and discuss and come up with a day to begin.

At any rate, the month has begun.  People have been stocking up and shopping and getting excited.  Food prices are creeping up.  We heard last week that even though it is a month of fasting, people actually eat more this month than usual.  They just eat it all at night.  The eat from dusk to dawn and don’t sleep and then work all day at their normal jobs.  By mid-July, they’re all a little fatigued.

We’ve been told that people just get a little bit squirrely with all the fasting and lack of sleep.  Sure enough I came home to a house that was just a tad bit off from usual.  Cloth napkins lying on the couch. Bathroom cleaning supplies still scattered on the floor.  Fried rice made with everything but the seasoning.  I don’t fault her.  She’s a mom and has probably been up since 2:30 AM cooking an early breakfast.

And here’s something I learned.  After everyone breaks their fast, the young march about the neighborhood banging drums and shouting and shooting off fireworks, entreating others to come to the mosque for the last prayers of the evening.  If this goes on nightly, it will be a long month for the dog.

I heard from my office staff that the last prayer of the day is a special one.  There is usually a special talk.  There is great debate about which mosque to go and who the best Imam is and which one makes you do and abbreviated 8 rounds of prayers instead of 23 rounds.  It’s too much up and down for many. They tried to explain, but I really don’t understand why it’s 23 instead of 24 or 20 or 25.  Something about perfection, but it was lost on me.

The other 10 or 12 percent of the population take a back seat here in Jakarta. Many restaurants close up during the day.  Those that stay open draw their curtains or put up a screen so as not to tempt any of the weak to eat.  We all try and eat respectfully.  There are hardliners who march about vigilante style trying to keep everyone holy.

It’s only been a few days. We’ll see how the month progresses.

Gardening Tips
One Chance to See the World