Past and Future Struggles.

Spending the weekend in Dili, just exploring.  Decided to learn more about the resistance and the Timorese struggle for independence.  Having been ripped off in little niggly bits by cab driver after cab driver, I decided against better judgement and against the post-humous wishes of my mother and probably those of my wife I rented a scooter for the weekend.

There is one place in the country that arranges such transactions.  It is a the end of rutted dirt road that looks nearly impossible to cross except for a motor cross bike, but I found my way there and picked out an under-powered scooter.  Nothing that would kill me too fast.  We arranged all the paperwork and exchanged the money and I was about to ride off when the attendant said, “How about you let us replace the brake pads before you go?”

Dude, I was 10 seconds from hitting the road with one brake?  You think you might have mentioned this sooner? “Yeah, how about let’s!. I’ll wait”

Here’s the brief version on Timorese independence.  Portugal had been the colonial ruler for 500 years until 1974 when there was a Coup in Lisbon and the Portuguese found themselves kind of preoccupied with things in the homeland.  So, they decided to offer independence to the Timorese.  There was some movement at the time toward this anyway.

The Indonesians, though were kind of worried.  They were fine with the Portuguese being there, but without them they saw the area as kind of backwards, poorly resourced and unable to manage itself.  They thought that an independent state would fail or become prey for some bigger unfriendly country like China or some other communist country.  They decided to take matters into their own hands.

In 1974, they invade in a full scale assault with paratroopers and landing craft, the whole works. The Timorese had a few guns, but also, bows and arrows.  They shot many of the paratroopers out of the sky and this made the indonesians very angry and they proceeded to shoot many Timorese who retreated to the hills.  By the end of the first year the 600,000 population of east Timor was reduced by 23%.

There was ongoing struggle and strife.  Protests, massacres, torture, and suppression, the whole playbook.  This went on for 28 years until there was enough pressure that Indonesia finally relented and let Timor have its sovereignty.  By the time all was wrapped up it is estimated that 400,000 were killed or displaced

I took a tour of a local international school and was rather dismayed to hear that the rate of illiteracy amongst local children is between 60 and 85%.  That is ⅔ to ⅘ or more of the population CANNOT read. I was also troubled to find that 25% of kids drop out of school after the 1st grade. Not the 10th grade, not the 8th, not the 6th, but the 1st grade!
This particular school gives 10% of its slots to local kids on a scholarship, but only after age 10. The problem is that before age 10, these kids are not really getting much quality instruction and so enter school with such a deficit in their education that they just can’t catch up.  This is such a shame because these kids could be the future leaders of this country, but they struggle to verbalize a complex thought.

One of the issues is that Portuguese is the official language, but very few of the schools teach it. They teach in Tetum which is what many people speak.  All the laws and contracts are in Portuguese, but the common people can’t read it.  Plus, the deplorable literacy rate compounds things, so that the general population can’t possibly comprehend abstract thought well and so how are they able to appropriately choose their government or make decisions for themselves?

The invasion by Indonesia was on the premise that these people couldn’t govern themselves, but the invasion destroyed 90% of schools, it set back reading and language and presumably most of the 400K who were killed were the ones who were many of the thinkers in East Timor.  My question would be, haven’t you just created the vulnerable, under-resourced population you were worried about in the first place? 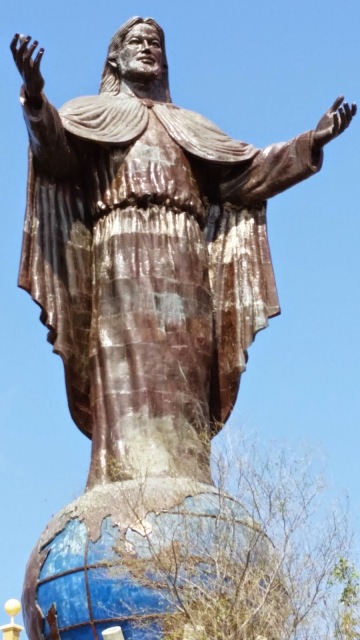 The 28 year struggle ended in 2002 and Timor Leste born.  In 2006 Indonesia gave Timor Leste this 120 foot, bronze statue of Jesus Christ seeming to melt over the globe in a hot wax works, meets the Cat in the Hat. The Indonesians, maybe wanted to say, hey, no harm, no foul, right?  Here’s a Jesus!  Jesus Shaves!  Oh, we know you don’t have any money and we aren’t going to give you any money to keep up this work of art, so 8 years later it will look kind of run down.  Enjoy your freedom!